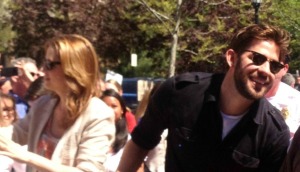 Cast and crew of “The Office” invaded Scranton on Saturday to say a final farewell to their loyal fans and the city. The hit NBC mockumentary revolves around the Dunder Mifflin Paper Company and the fictional Scrantonians who work there. More than 10,000 people filled the streets of Scranton to celebrate everyone’s favorite comedy, “The Office.”

Christina Scully and I were issued press passes so that we could cover the event for The Aquinas.

Editor-in-Chief Christina Scully and I had the amazing opportunity to cover the entire event for The University of Scranton‘s newspaper, The Aquinas. We even got nifty press passes that helped us get front-row seats to all the events and great photo opportunities!

The day kicked off bright and early with the Blogger’s Breakfast where bloggers and fans had a chance to mix and mingle. The morning started with excitement when actors Paul Lieberstein and Andy Buckley showed up to sign autographs and meet with fans. Buckley made sure that he stuck around at the event long enough to get a picture with every single one of his fans.

The crew answered many questions for the audience and reminisced on their time making the show. Fans had the chance to view never before seen footage of the show. Property Manager Phil Shea, reminisced on the early days when the show was first starting. He discussed how many of the props seen on the show were gathered from local Scrantonians.

When fans see things like the Froggy 101 sticker on the office desk, those items were all collected from the locals!

“We’ll take this back to California with us,” Shea said of the fan support for the show.

Executive Producer Greg Daniels said, “It has been a privilege to get to work on this show. To have gone nine years — it’s amazing. We have the fans to thank. They kept the show going.”

After the Q&A there was a short break until 2 p.m. for the big parade which began by St. Thomas Hall. Fans swarmed downtown Scranton to get a peek at the stars as the parade made its way down Linden Street to the Lackawanna County Courthouse square where the party continued. The cast and crew took to the stage to talk to the audience, sing and perform with the Scrantones. 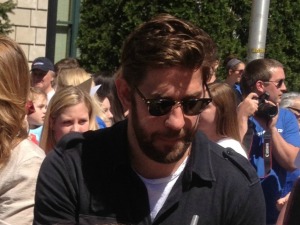 John Krasinski signs autographs for fans during the parade.

After the Final Farewell at the PNC Field came to a close, the stars of the hit show took to the streets of Scranton to party it up one last time. As they say, “There ain’t no party like a Scranton party” and according to their Twitter accounts, they had a pretty crazy night. And I mean they really partied. Fans flocked to The Backyard Ale House where the stars hung out all night, tending bar, buying drinks and taking pictures with fans. (John Krasinski even rocked a University of Scranton tshirt!)

Celebrity Tweets from their big night out in Scranton:

Brian Baumgarner (@BBBaumgartner): Thanks to the 20,000 people who showed up to say goodbye today. We’ll see you tonight. Drinks are on @johnkrasinski

Brian Baumgartner (@BBBaumgartner): Great great times in Scranton last night. I am PRETTY sure I bought all of these people a drink.

Brian Baumgartner (@BBBaumgartner): None of us have gone to bed.

After the Wrap Party, the cast took to Twitter to thank their fans and their beloved city of Scranton:

Jenna Fischer (@jennafischer): From the bottom of my heart, thank you Scranton for the most special send off. Great city, great people, great day.

Brian Baumgartner (@BBBaumgartner): Thank you City of Scranton for throwing us the greatest Wrap Party any show has ever had. Send pics if you were there!

Kate Flannery (@KateFlannery): It is impossible to individually thank everyone who came out yesterday, but please know I love each & every one of you. Reading every tweet!

Craig Robinson (@MrCraigRobinson): Dear Scranton……I mean, what can I say? So much fun hangin, u all couldn’t have been nicer. Thank u. Love u

The final episode will air on NBC May 16 from 9-10:15 p.m. (NBC gave the show the go-ahead to run an extra 15 minutes longer than usual). There will be an hour long special starting at 8 p.m. about “The Office” Wrap Party. Be sure to tune in and see if you can spot yourself!

Chris Dolan, photographer for The Aquinas, was on hand all day snapping photos of all the stars as they spent their day in Scranton. Check out all of his amazing photos from the day.

Check out the live Twitter coverage of the event.