Religious Tolerance: find the beauty in every religion

In more recent years, religions across the world have been on the decline. According to the Washington Post, in the 1950s those who identified with no religion was at about 2 percent of the entire population. In 1970, this percentage grew to 7 percent. Now, the percentage has swelled to almost 20 percent of the population.

According to Pew, 74 percent of those who don’t identify with a religion grew up without a religious belief. 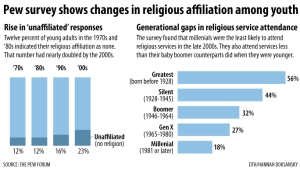 It’s hard to locate the source of the problem. With the younger generations it seems religion and faith have taken a back seat. More children are being raised faithless in the United States than every before. The decline in religion dates to the 1990s when trust in religious institution became questionable. Scandal is no stranger to religion, including sexual scandals of church leaders and the church’s opposition of same-sex marriage. 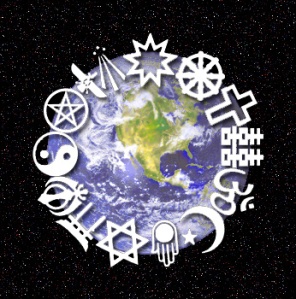 I’ve noticed the decline of religion in my life. My great-grandparents were straight off the boat Irish, strict Roman Catholics. Both my grandparents and my parents were raised Roman Catholic, but me? Well, I was raised Roman Catholic too, but not in the same sense they were. My upbringing was not strict. We did everything the normal Catholics did. My siblings and I have all been baptized, confessed, communed and confirmed. We used to always go to church on Sundays until there was some controversy with my mom’s favorite priest, and we stopped going after he left the parish.

Over the years I’ve grown apart from the religion I was raised in. Learning about other religions and understanding what others believe in has made me more accepting of other ideas. Maybe Catholicism isn’t the only important religion out there? Maybe I think there’s more than one God? Maybe I don’t even believe in God?

I have always been one to question religion and I think I always will. There will never be a way to really known and that’s why we have faith. As I’ve grown up, I’ve lost the faith I had in the Catholic church. I like to think that I’ve developed a syncretic religion that is all my own.

Here is what I know…

And let’s face it… I have nothing nice to say about the Westboro Baptist Church.

When you take a chance to open yourself to others beliefs you might be surprised. You might end up believing in something you weren’t raised to believe in. You might learn to tolerate others in a new way. There is something beautiful in every religion if you take the time to find it.